Our fonts are designed & developed by actual graffiti writers, each with decades of experience pushing the boundaries of the art form into new places, not least of which, into the digital realm. Staying true to the culture & its traditions while working to bring new innovations with every project is our primary goal. The ever-evolving & highly organic art form of graffiti lettering defies mechanical systems like type by nature. It is our mission to invest the hard work it takes to do the art form justice in that arena. Over 20 years ago, artists & designers from the San Jose CA based "Full Time Artists®" crew joined forces with a handful of of other font developers & writers from around the globe to take on this challenge. This mission continues today & everything you see on this web site is the result of that work.

The bay area, underground Hip-Hop crew "Full Time Artists®" has spawned a number well known names since it was founded in 1991. The Graffiti Fonts® type foundry is one. Established in 1999 under the umbrella of FTA's already flourishing Highground™ label, the foundry was concieved exclusively to design graffiti style typefaces. At the time there was basically no such thing. With 3 decades of history, graffiti had a prominent place in fine art & commercial design but had yet to enter the world of mechanical type. Growing up in the dawn of the digital age, having years of experience in bringing graffiti into our digital design work, specifically vector wildstyles and other lettering, the graffiti artists & graphic artists of FTA we were born for this task. 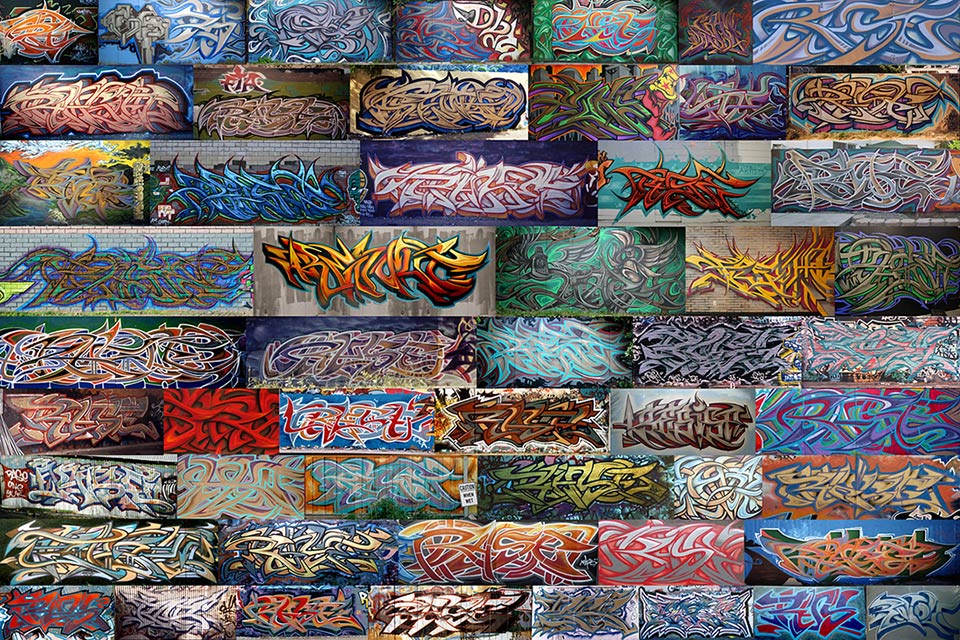 This collection of photos shows pieces by Raseone of Full Time Artists® painted between the early 1990s and the present day.

In 2012 and again in 2019, his pioneering efforts & prolific output bringing graffiti lettering into the world of mechanical type were recognized in the Yale University texbook "Graphic Design A New History". Rase holds a number of awards from graphic art exibitions & graffiti competitions & has been interviewed in prominent graffiti & graphic art magazines. His work has been featured & appeared in projects alongside other well know artists in the genre such as Shepard Fairey, Kaws, Crayone & Cope2. Some of his earlier work was among the first to be added to artcrimes.com, the worlds first website dedicated to graffiti art & can still be seen there today.

This website & the content you'll find here are the culmination of over two decades of research, design & development. Our foundry published its first fonts on the crew homepage FullTimeArtists.com begining circa 1999. By the time we were ready to set up a dedicated site we found that GraffitiFonts.com was taken. We set up shop on GraffitiFonts.net & spent the next several years both competing & cooperating with the .com before beginning to take it over circa 2007 & finally merging the two sites circa 2012. The modern GraffitiFonts.com is the initial point of publishing for all of the original & exclusive graffiti style typefaces that we design as well as the home base for our collections of carefully curated fonts from other writers & type developers around the world. Here you'll find both free font downloads and the opportunity to purchase commercial licensing. This combination of free & commercial typefaces is known as the "Graffiti Fonts® Collection". Our goal with this site is to maintain a balance between high standards & objectivity to build the largest, most comprehensive & sophisticated collection of real, graffiti style typefaces anywhere on earth & to help maintain the integrity & history of the genre as a whole.

This image shows the cover art for the original four editions of the Graffiti Fonts® collections. First released between 2003 & 2009, these collections are still updated regularly.

Our first CDROM collection was released in late 2002 & was the first collection of graffiti style fonts ever assembled as a commercial product as well as the first physical, hard-copy collection. In the years that followed we released a new, larger & more sophisticated collection roughly every year. As the collections evolved they came to include stock images, vector art, templates, photo cut-outs & other supporting materials. Most of our original typefaces were released exclusively through these large, hard-copy collections up untill the 2009 release of Graffiti Fonts® 4.0 Codename: Burn. The massive GF4 collection was released on a DVDROM with over 4GB of content & a full-color, 32 page instruction booklet. Four years in development, with a $600 price tag, we decided this was about as far as we should go with the collections. Since then we've focused mainly on the release of new, individual font families & the continued expansion & improvement of our existing titles but we continue to update & expand the existing four collections keeping every font family up to date & even adding new titles & new supporting materials. Updated versions of all four of the original collections are still made available today in both digital download & hard-copy formats, at their original prices.