A History of Modern Graffiti Typefaces - Part 1 of 6 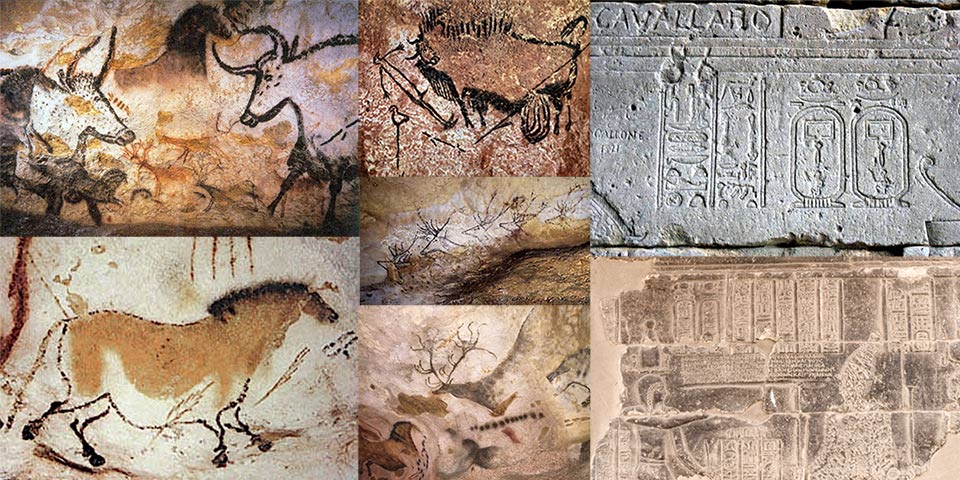 The images on the left show some of the many prehistoric paintings from Lascaux cave in France. On the right the images show ancient Greek graffiti on the temples of Philae & Dendur in Egypt.

The origins of writing are found in graffiti.

As long as there have been people, there has been graffiti. This simple term "graffiti", plural for "graffito" mearly describes unauthorized or unofficial markings on a surface. The word is not specific to the modern art form of Graffiti that emerged & coalesced from a combination of 1960's & 70's street culture along-side east coast Hip-Hop, Punk Rock, street gang culture & even earlier zoot suit & cholo culture on the west coast. In it's basic definition "graffiti" predates the written word & can describe markings seen throughout human history.

Unauthorized, millenia-old scratchings can be found on on the surfaces of the most ancient ruins of civilization. Next to masterful relief carvings & finely inscribed text you'll find graffiti scratched, chiseled & written for much the same reasons that it is today. Prehistoric artwork, sometimes very sophisticated, from the walls of caves is one of our oldest & most important ties to the cultural origins of human socienty. Graffiti provides some of our earliest evidence of human consciousness. like an ancient spearpoint which took days to produce, graffiti provides clear evidence that early humans could make sacrifice in the present in service of the future. The complex and abstract concepts of prehistoric graffiti clearly illustrate the ability of early man to understand & describe their environment. Most of all it displayed not only the ability to understand the value of carrying information forward into the future but also man's unique desire to communicate with eachother & with higher powers be they nature, god, the universe or thier ancestors. The depictions they left behind are amongst our most valuable insights into how they lived. The origins of visual communication lay in these prehistoric drawings. One could argue that the origins of writing itself are found in graffiti. 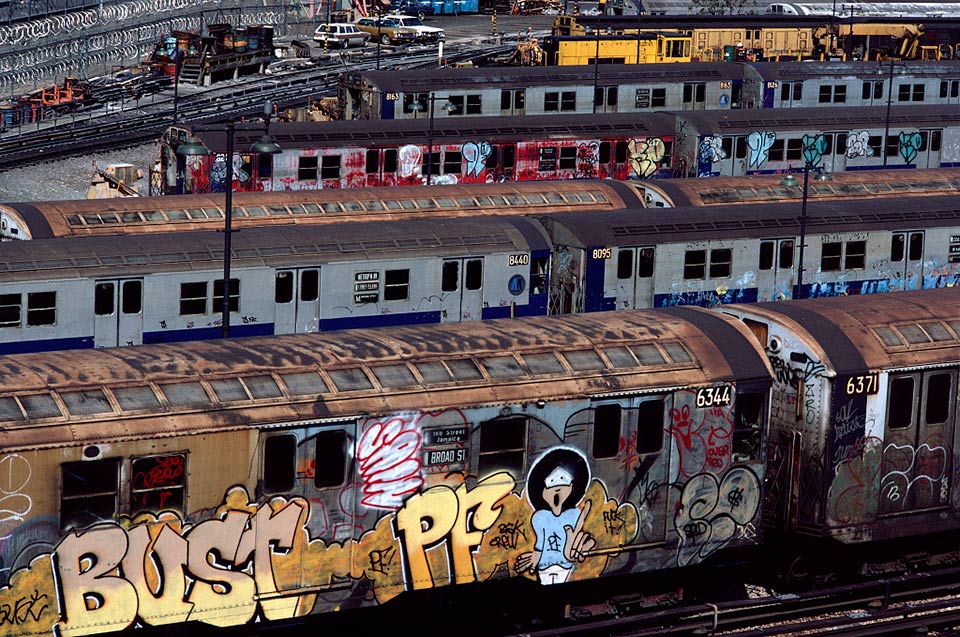 View from the Broadway Junction elevated station of the l-train, Brooklyn 1983.

In modern times, graffiti continues to emerge spontaneously from disparate cultures, manifesting in sometimes esoteric cultural phenomenon with no particular connection to modern-day, capital G, Graffiti art. Even in the most tame of 20th & 21st century American neighborhoods & cities one would have no trouble finding the random scrawlings of children & adults alike. From the WW2 era, 1930s-40s "Kilroy Was Here", the 1970s-80s "Skate or Die", myriad protest slogans, to randomness like band names & declarations of love, Graffiti, as it did with founders of the modern movement springs from nowhere over & over across time & culture.

The graff we know today grew from a combination of such cultural elements & the drive of inner-city youth to assert themselves, their individual identity & their very existence. Beginning in the late 1960's, now legendary, early writers like Cornbread, Topcat, Taki 183, Phase II, Tracy 168 & Stay High 149, & others broke countless rules, norms & definitely laws asserting their presence thus gaining an individual recognition that helped fuel the emerging concept of graffiti fame that drove the early art form & movement. There's debate over whether the mass appearance of graffiti in early 1970's New York developed independently or was inspired in part by earlier phenomena in Philadelphia or Los Angeles. Even the signature tendency to target subway trains is not unique. Drifters & "hobos" have been leaving their mark on frieght trains in the form of expressive drawings, phrases & signatures, including nick-names since the great depression. In any case, these mostly inner-city pioneers of the latter 20th century defined the Aesthetic tradition, methodologies & motif of the modern movement. With elements of all of these phenomena, graffiti evolved into the robust subculture & art form that we know today. 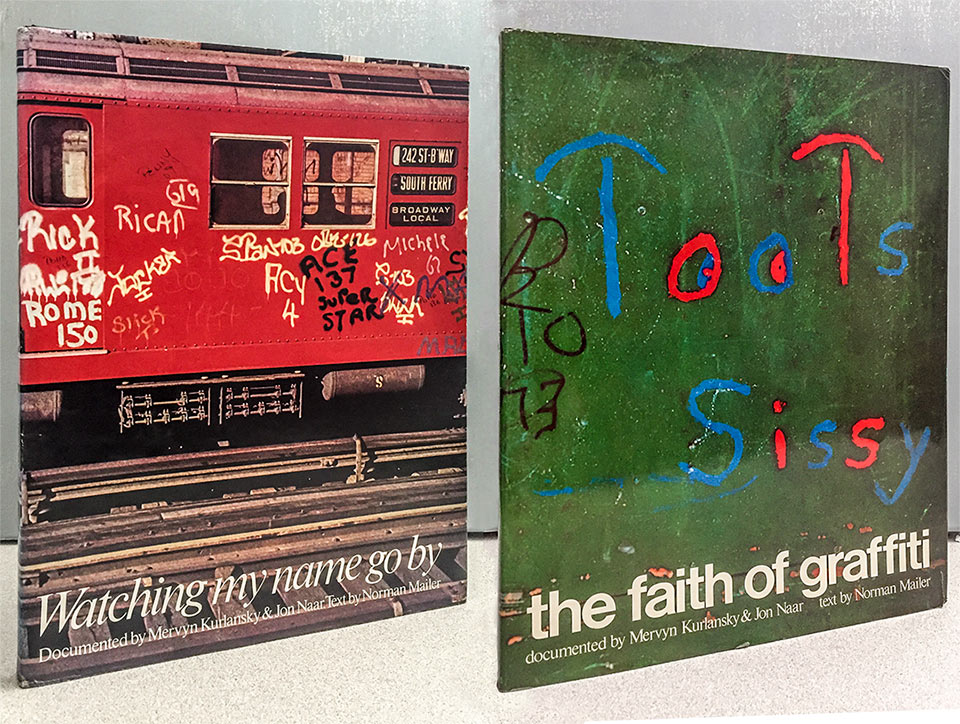 The first ever book about modern Graffiti art was alternately titled "The Faith of Graffiti" in the U.S. & "Watching My Name Go By" in the UK. This rare and now collectable book was first published in 1973. There are at least 4 different versions of the original book with at least 3 different covers. The contents are the same in all versions.

"The name is the faith of graffiti."

Over the last half of the 20th century, on into the new millennium graffiti has taken on a rich life & culture of it's own through this modern incarnation. The word has taken on a secondary meaning as a proper name for one of the largest & most influential art movements in history. "Graffiti" known to purists simply as "writing" had bubbled up into the mainstream many times throughout the 70s, 80s, 90s. A now rare & collectible 1973 book entitled "The Faith of Graffiti" documented what is widely accepted as the birth of this phenomenon, exploring with some reverence early New York subway & street graffiti at a time when the art of writing was in it's infancy, a full decade before the iconic book "Subway Art" served as a blueprint for countless new writers across the globe. This book was in some ways the culmination of a number of newspaper & magazine articles that had appeared as graffiti began to blanket the city to a cartoonish degree. For some, this simple, trend of mischief quickly developed into an almost religeous practice.

By the early 1980s Graffiti had long-since found it's way into art galleries & spread around the country & the world largely via films & documentaries like WildStyle, StyleWars, Beat Street & Breakin. As Hip-Hop culture with it's four main, traditional elements: Graffiti, Breakdancing, Rap & DJing grew to huge proportions becoming the dominant youth culture in the 1990's Graffiti art had become a highly sophisticated & elaborate discipline producing works which arguably rival, in technical mastery & artistic value, any other period or category of fine art. By the turn of the century, as kids who grew up on Hip-Hop came of age however, this extremely controversial art form was much more widely accepted by society at large than it had ever been in the past. Graffiti still had a dark side & was still reviled in it's entirety by many but the art had reached an undeniable level of sophistication & had massive numbers of supporters.

By this time Graffiti style lettering & artwork could be found frequently in the ads & packages that permeated society. Graffiti in fine art galleries was common. Writers were often working artists. Companies had sprung up making art supplies, namely high-quality spray paint & markers specifically designed for & targeted towards graffiti artists which in-turn helped improve the quality of the art itself. This once almost completely criminal motif, once seen by the vast majority of people a sign of blight & urban decay was now in a solid position of influence & prominence in the worlds of both fine art & commercial design as it had already been in popular culture for some time. The common & heated debate on Graffiti's status as a valid art form was over. 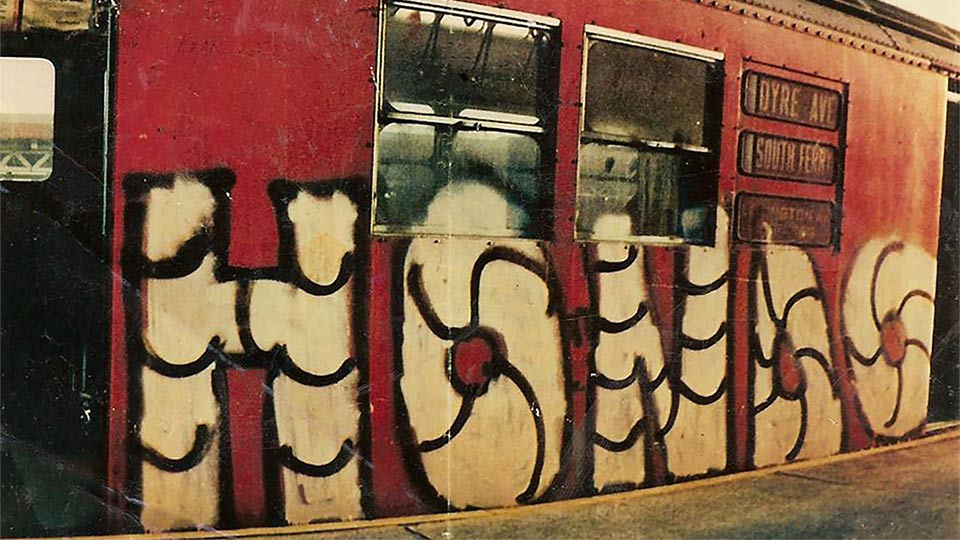 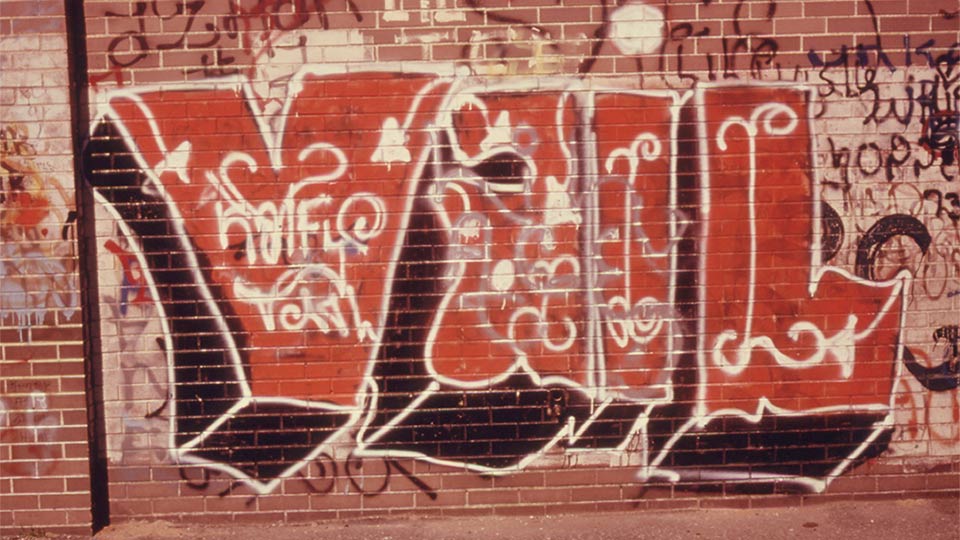 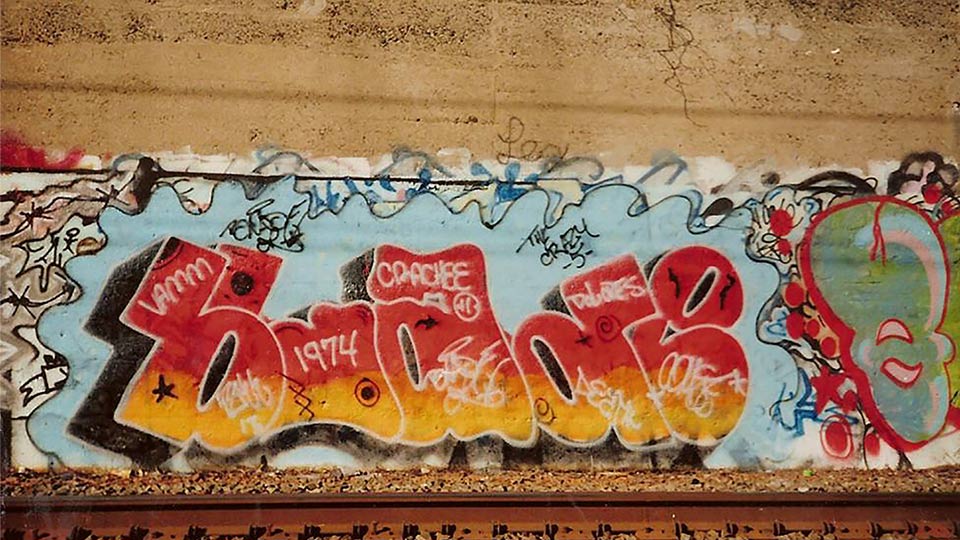 The legendary Blade, 1974 in the Bronx
Image Courtesy of JJ & Special K. 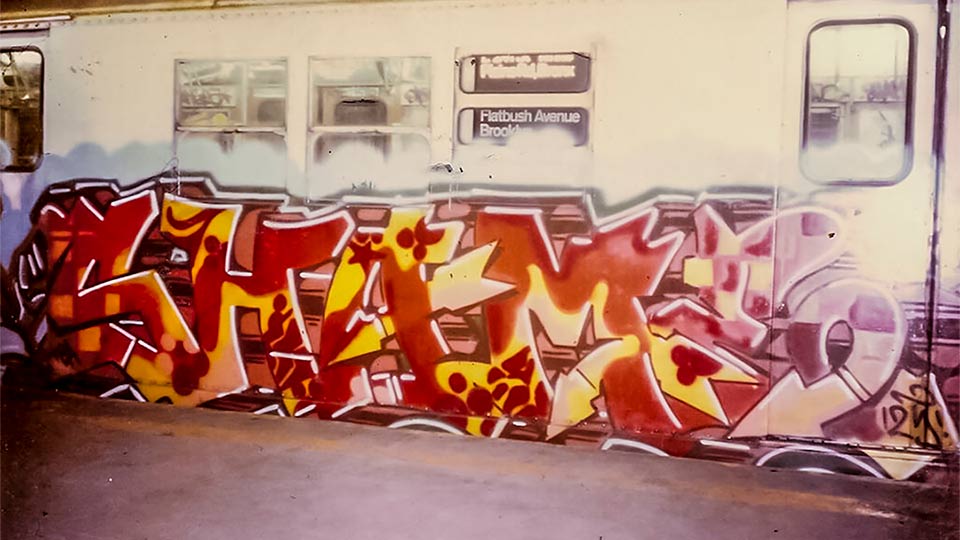 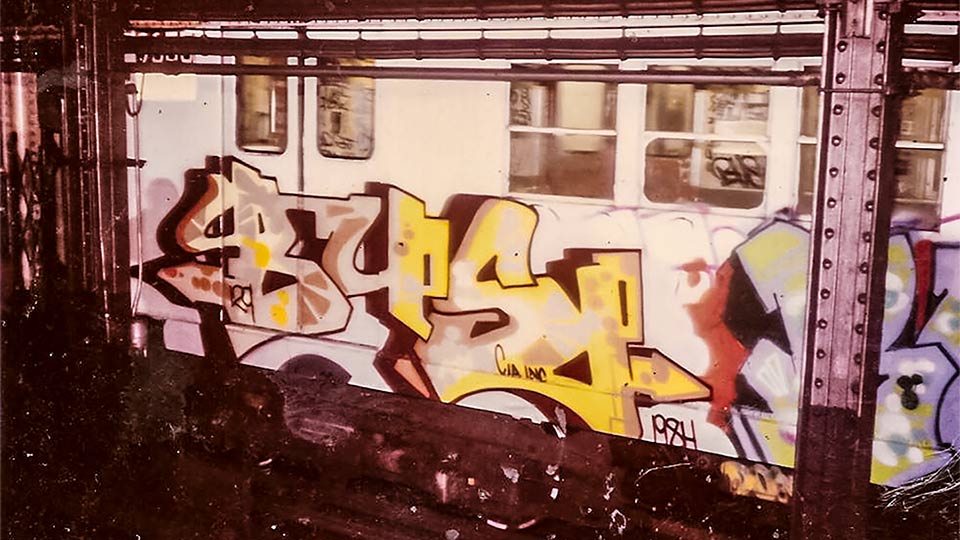 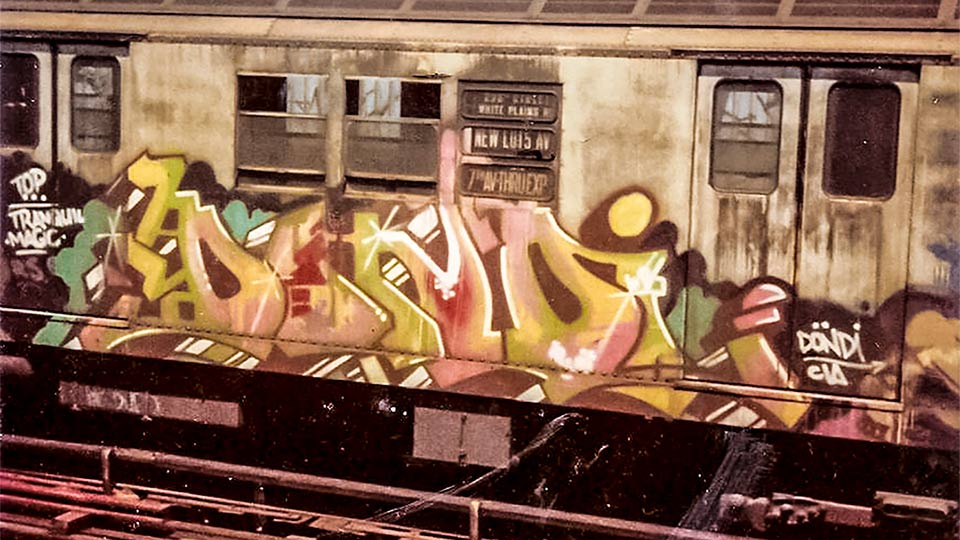 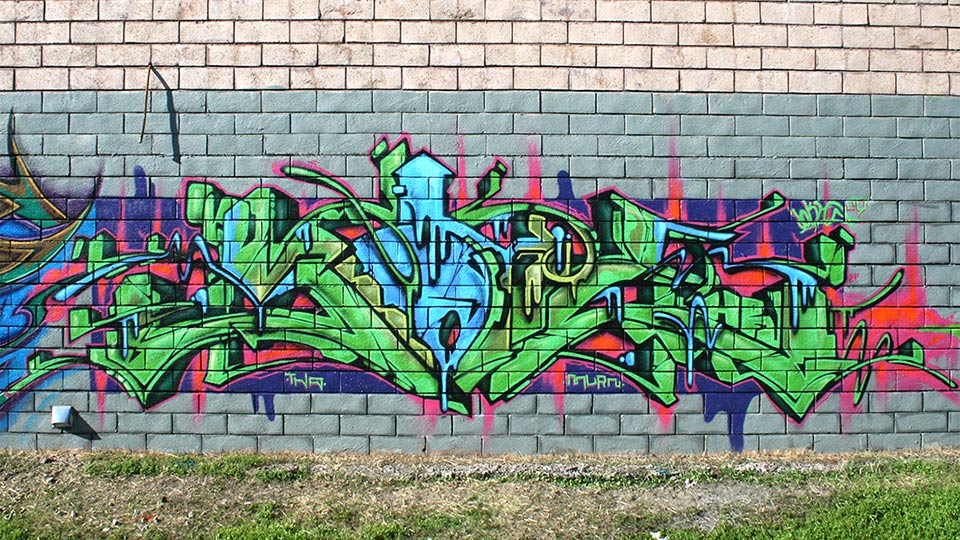 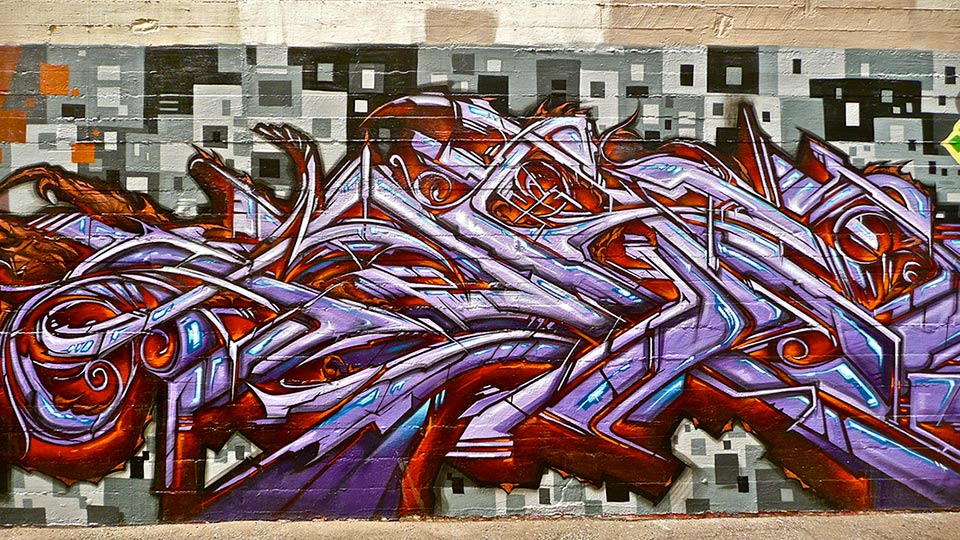 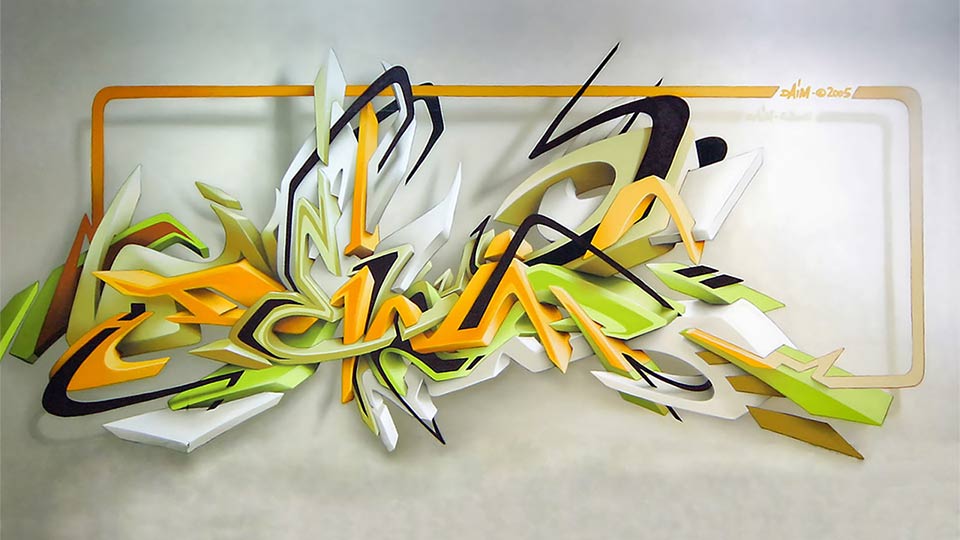 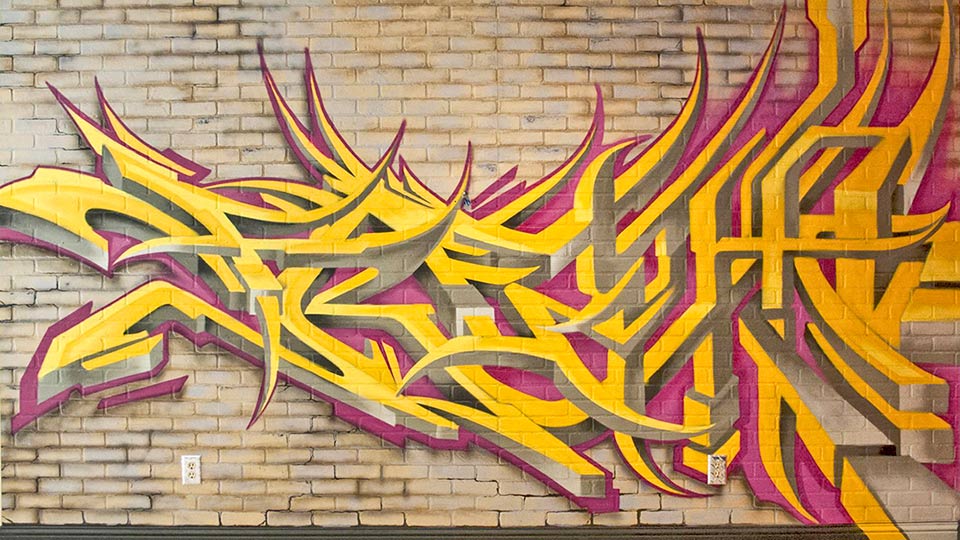 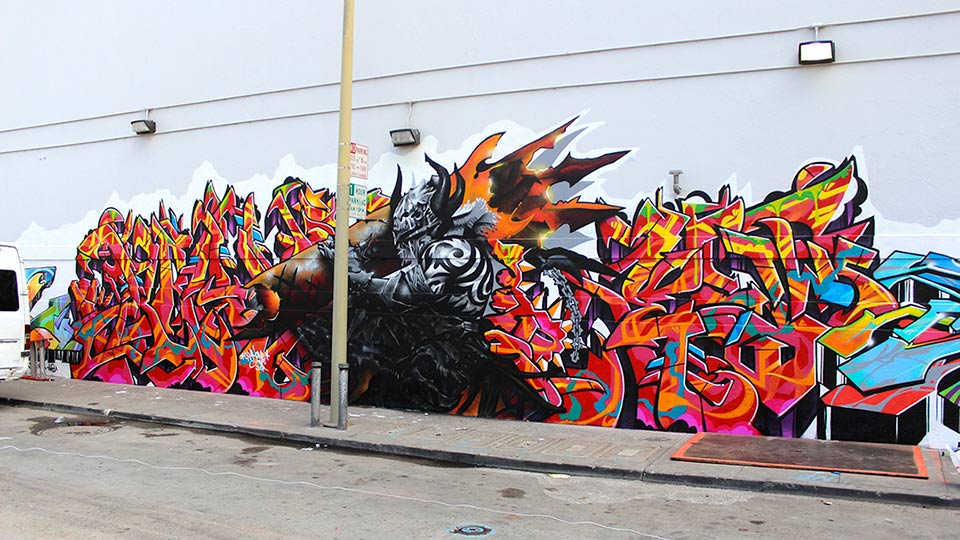 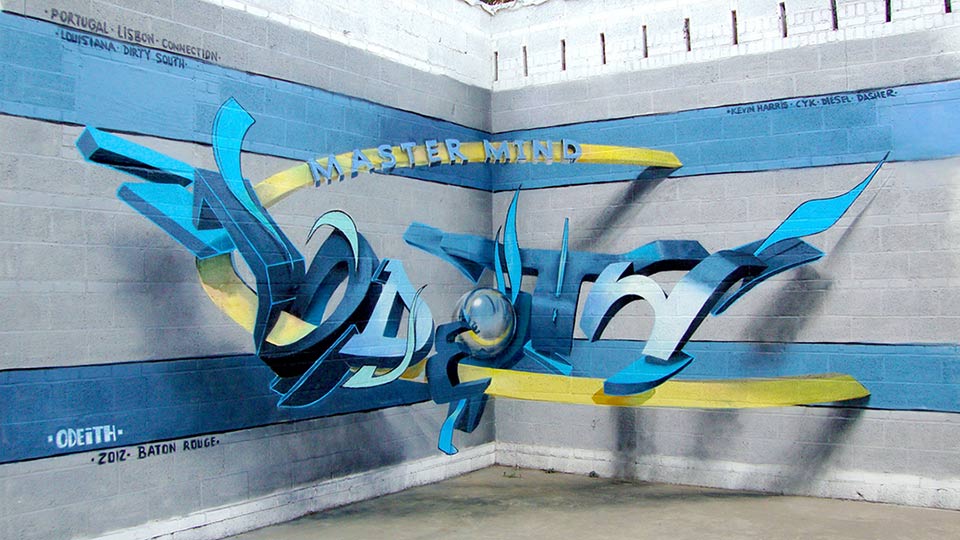 
Next Section - Graffiti in Graphic Design