A History of Modern Graffiti Typefaces - Part 6 of 6

What is a graffiti font?

Technically, "Graffiti Fonts®" is a brand name like Coke® or Q-Tips®. The trademark was first registered in 2004 & the foundry is dedicated to the design of graffiti style typefaces. The foundry actually predates the genre & was the source of the majority of early graffiti style fonts. More broadly, a graffiti style typeface is any typeface designed to emulate graffiti. While this may seem vague, it's quite clear to graffiti writers & those familiar with the culture.

A graffiti style font is any font that can be used to create tags, throws or pieces.

For many people, that statement won't mean much. For those unfamiliar with the jargon or the graffiti art form (sometimes called "Style Writing") & the surrounding culture & traditions, drawing clear bouderies around a graffiti genre in type is admittedly more difficult. As a result, most font websites, design blogs etc. do a fairly poor job of determining what IS a graffiti style & what IS NOT. The subject seems to boggle some so badly that the difficulty in defining "graffiti" seems to metastasize into a difficulty in defining a "font". This results, not only in "graffiti" categories filled with fonts that don't look like graffiti but also in lists of Photoshop & Procreate brushes being intermingled with clip-art, typefaces & hand lettering all labeled as "fonts".

Examples of "Tags" from prominent writers spanning the 1980s to the 2010s.
Images Courtesy of Art Crimes & Full Time Artists. 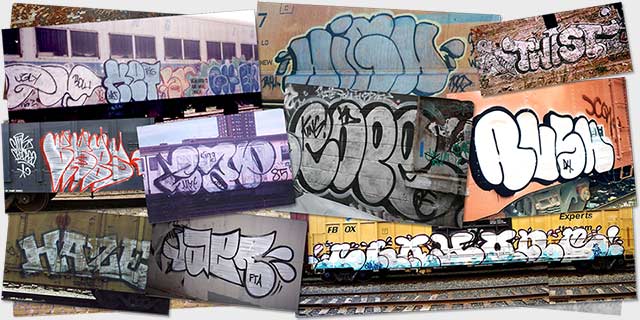 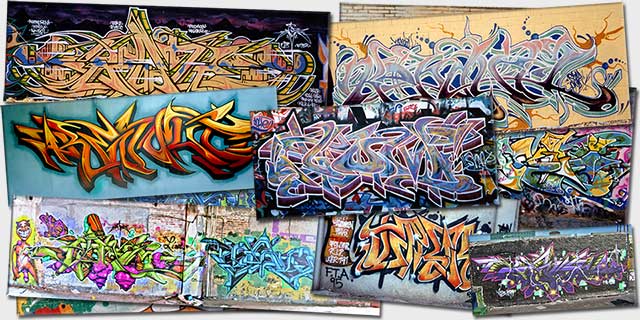 "Real" graffiti is mostly defined by it's physical location. If you paint anything on a public surface without permission, its graffiti. If you paint the same thing on a canvas maybe not. Removed from the physical context, a graffiti style must be defined by it's visual attributes. For an art style that adopts imagery & technique from everywhere & everything, you need to look for things that are unique to the style, innovations, contributions, the elements of the art that are new to the world. Look for the aspects that one would use if they were asked to imitate the style. Graffiti has tons of these identifiers.

In reference to a certain form of grown-up content, a supreme court justice once said: "I shall not today attempt further to define the kinds of material I understand to be embraced within that shorthand description, and perhaps I could never succeed in intelligibly doing so. But I know it when I see it..."

I know a graffiti style when I see it. Many do. For those who might not, I'll do my best to intelligibly "define the kinds of material I understand to be embraced within that shorthand description".

Certainly any font designed to look like it was hastily scrawled onto a surface before someone catches you could be called graffiti but lets dismiss the basic, dictionary definition of the word "graffiti" for a moment & assume we're talking about the modern art form of Graffiti Writring (or Style Writing), tags, pieces, throws etc.. Let's also assume that when we say "font" we're using the modern colloquial definition... actual typefaces, not just styles or even alphabets that someone designed. Since there were no pre-digital, hot metal, graffiti typefaces, we're speaking specifically of installable, digital typeface software in formats like: PostScript, TrueType & OpenType, actual fonts that you can actually type with.

To define graffiti typefaces one needs to first define graffiti lettering itself. As described above, the modern art form of graffiti writing has evolved far beyond the simple act of writing or drawing on walls & trains without permission. A complex motif is in play, highly varied but not at all random. The following 3 photos show well established locations frequented by writers of the time. Each shows a hectic layered mass of graffiti art displaying tags, throws, pieces & characters from hundreds of writers built up over the course of years. 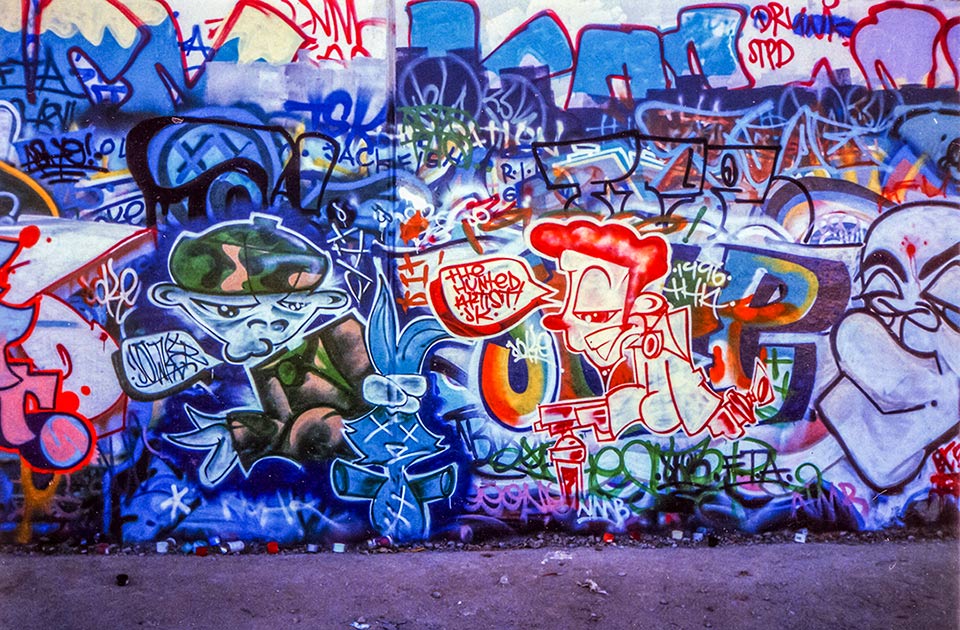 This photo from "the Great Wall" in Milpitas CA consists of many layers of graffiti in the modern tradition circa 1996.
Image courtesy of Full Time Artists.

This photo from "the Art Gallery" in San Jose CA shows a mass of pieces, tags & throws circa 1993.
Image courtesy of Full Time Artists.

Image from "the Walls of Fame" in San Jose CA, circa 1992 showing layers of graffiti art massed over several years.
Image courtesy of Full Time Artists.


Not All Graffiti is "Graffiti"

This next set of 3 images also show layered masses of graffiti on walls built up by many people over years. Similarly the writings & drawings & stencils shown in these images were rendered with spray paint, markers, paint brushes, basically the same array of tools as the previous set of images. Both sets display a wide array of styles, a rainbow of vivid colors & a similar overall effect. The images are similar in many ways. There is however a very obvious difference. Aside from the technical complexity & artisinal merits of the individual bits these sets of images also illustrate the contrast between the random thoughts of passers by & the sport-like practice of graffiti writing as an art in & of itself.

Layers of writing, drawing & stenciling on a wall that are not of the modern tradition of graffiti art.
Images Courtesy of the Creative Commons. 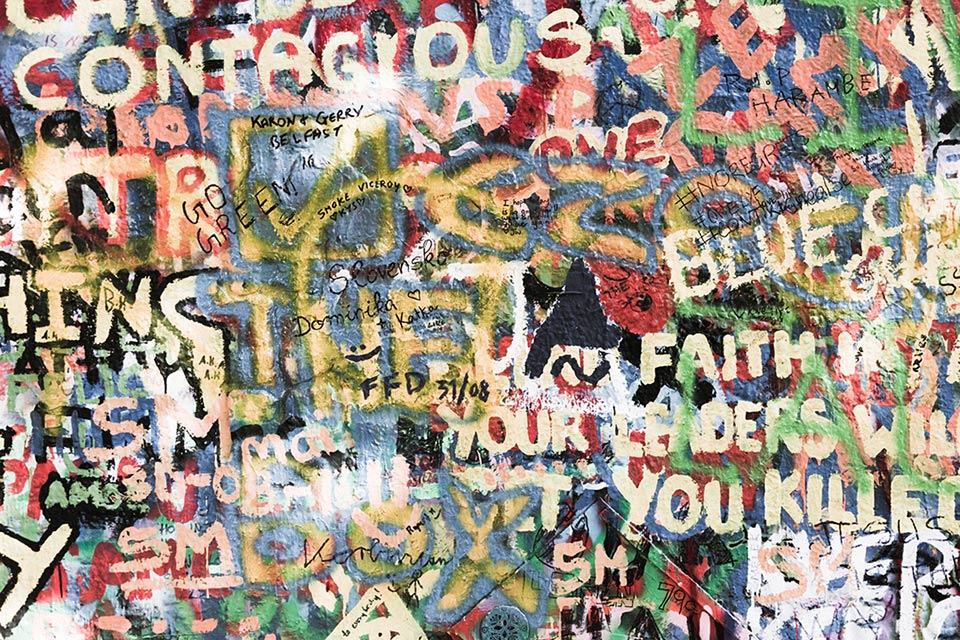 Many layers of graffiti written with a combination of spray paint markers & paintbrushes
Images Courtesy of the Creative Commons. 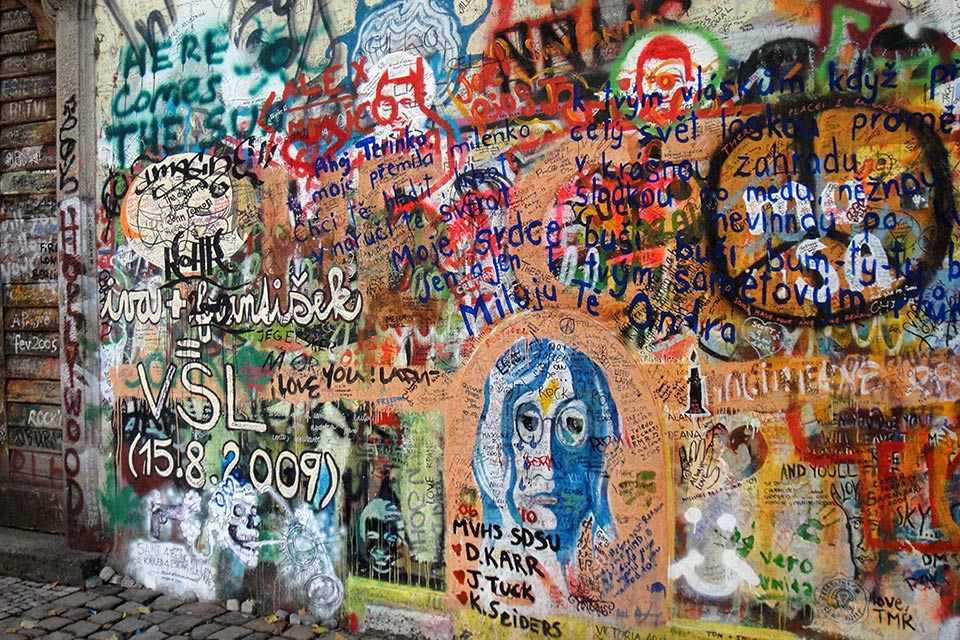 Examples of graffiti on the John Lennon wall in Prague including writing, painting & drawings.
Images Courtesy of the Creative Commons.

As is true of all art, there is a lot of subjectivity at work. Many fonts will fit cleanly & undeniably into a graffiti genre while many will contain elements of many possible categories making them difficult to define. Not surprisingly, all of this leaves us with no clear & simple way to define a singular, all encompassing graffiti genre within lettering & therefore within type design & typography.

We can get much closer & create clearer definitions if we accept the many categories & sub categories of lettering within graffiti itself. These categories have fairly clear divisions some of which are based on tools & techniques used to achieve them while some are based on very clear stylistic definitions. I'll summarize the main first order, functional types in order of complexity here:

These categorizations were developed & are accepted by graffiti writers themselves. In reality there are no hard lines between these categories of lettering. They overlap & bleed seamlessly into eachother. They could be broken into numerous sub-categories. For example: the top-to-bottom "Philly Long Hand" style is a distinctive sub category of handstyles or tags, as are the infinite variations of West Coast Chicano styles. Nonetheless, using these basic functional divisions we can achieve some reasonable way to identify, sort & define the categories of graffiti within the established world of type.

Captions & tags are both written forms. Throws & blocks are similar animals with similar function. The line between a piece & a wildstyle is blurry at best. 3D realism is pretty distinct. Productions could potentially be represented using a family of complimentary fonts but that's a bit of a stretch. This brings us full circle, back to the original conclusion. A graffiti style font is essentially a font that can be used to type out tags, throws or pieces.

Considering the evolution of style over the decades, distinct regional styles & the myriad other factors at work, dozens, even hundreds of clear classifications exist, more classifications of lettering than there currently are fonts to represent. Many concepts useful to the classification of real graffiti art wouldn't be particularly useful in classifying graffiti typefaces. Examples of such concepts might include: Burners, Toy Styles, Whole Cars, Heavens, Scribes, Mops, Silvers, and a multitude of other potential classifications the definitions of which depend on often non-visual or perspective based traits or even traits based on the subjective opinion of the viewer such as quality, location, medium, difficulty level, prominence or originality, traits that can not be objectively defined as elements of the the lettering style itself. Many can not be represented visually, many would not survive translation into a typeface. While this cleaves off some important graffiti concepts, it sharpens the focus on objective traits applicable to type.

Even given the most modern font technology including OpenType scripting that allows dynamic algorithms to create patterns of precisely matched glyphs, layered type systems that enable outlines, fills, details & 3D effects to be deployed automatically or full color, vector SVG or bitmap fonts there are still many fundamental & defining characteristics of modern graffiti lettering that simply can not be used taxonomically to define the lettering styles themselves or any typefaces that may be created to emulate them. Within the motif of graffiti art, a lettering style is organic & alive & presents infinite possible permutations. Like a species of plant, a style has many defining characteristics, often easily identifiable but no two instances are ever identical. Like living things, these styles develop & evolve over time, building increasingly complex systems & increasingly unique traits, adding to their collective DNA as the artist works over a lifetime & as styles are passed down & imitated by others. Like calligraphy or script, graffiti lettering is at odds with the core concept of type & can only ever be partially represented in the vast but ultimately finite universe of mechanical type.

With a basic absense of limits, graffiti lettering will forever defy strict categorization. The categorization of typefaces in general similarly blurs & blends around the edges of each category. As it is within the greater world of visual art, graffiti is a microcosm within type, an independent universe. Unlike most other genres of visual art, graffiti started from scratch. Beginning with the artistic prowess of the average child, the art form expanded & evolved rapidly, pulling in any & every influence, technique, tool or other resource it needed to survive, adapt & evolve. This process tends to repeat every time graffiti springs up in a new geographical location, a new medium or media. Predictably, the emergence of graffiti lettering into the domain of mechanical type clearly repeated this process. While scientifically unsatisfying, the intention of the author is a major factor in determining whether or not a font is a "graffiti style font". In type, outside of graffiti's usual context that intent needs to be backed up by actual, visual attributes otherwise, any style could be labeled as a graffiti style. Graffiti writers who know the motif best can usually identify the pressence of its influence at a glance. If there must be a genre then thats how it should be defined, as the graffiti artists, the style writers define it. In the end, any viable definitiion of a graffiti genre within type must center around those core lettering concepts that graffiti introduced into the world; tags, throws & pieces.