A History of Modern Graffiti Typefaces - Part 2 of 6 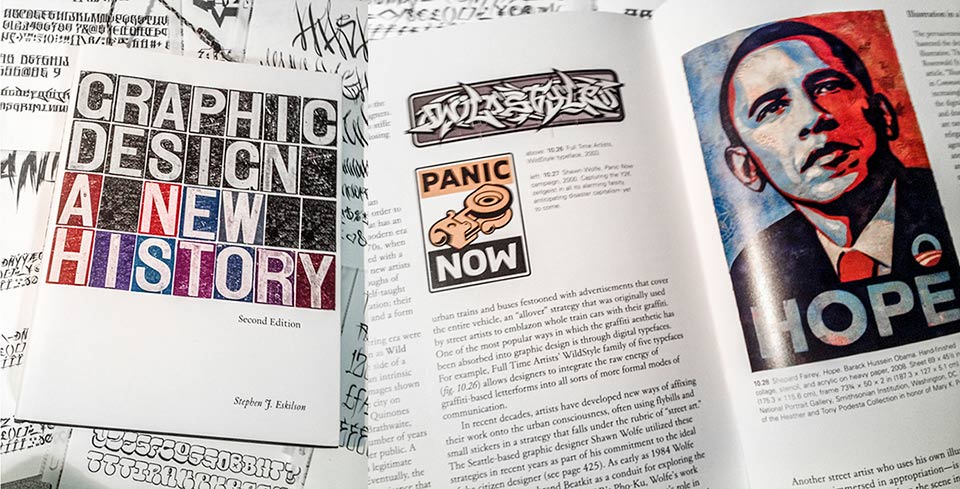 Modern Graffiti art is so vast & varied in it's applications, mediums, content & styles that it can be nearly impossible to define or classify within more traditional art & design concepts. In the 2012 Yale University textbook entitled "Graphic Design A Modern History" author Stephen J Eskilson credits graffiti art as being among the strongest influences on modern design trends featuring the WildStyle® font family by Raseone alongside the iconic Obama HOPE poster by Shepard Fairey & Shawn Wolfes 1999 Remover Installer as examples of graffiti's widely varied penetration into contemporary art, commercial graphic design & as the author puts it: "more formal modes of communication".

With applications across virtually any & all media, mediums & material the skill set of the modern graffiti artist often spans across multiple disciplines. Even so, in the world of digital typefaces & typography graffiti lettering was mysteriously late to the table. It was however only a matter of time until artists who grew up in the age Hip-Hop & graffiti art, desktop publishing & omnipresent computers & eventually the internet would combine these factors to fill this void. Traditional elements of graffiti lettering such as wildstyles, handstyles, throw ups & blocks as well as traditional (if not unique) graffiti treatments such as outlines, 3D, detail fills, drips, splatters, strokes, distressing etc. would soon start to appear within and influence these more formal, commercial & mechanical aspects of design & communication. By this time the now highly developed artistry of graffiti lettering had established it's own traditional motifs, developing not only variations & combinations of preexisting concepts in lettering but also spawning & propagating a gigantic wealth of new & unique techniques, styles & morphologies, pushing the bounderies of lettering & now even type.

In its natural environment, out on the streets and in the hidden spaces of our cities graffiti lettering is often completely illegible to the untrained eye. The heavy, abstract & sometimes complex stylization seems to defy the core function of text to communicate information. Even early graffiti writers dismissed the fanciful lettering of emerging wildstyles & elaborate tags as self defeating. This debate cuts to the core of graffiti lettering concepts & continues today. Largely due to these extreme stylistic liberties most graffiti style fonts function primarily as headline or display fonts. Many also function specifically and almost solely to emulate graffiti itself being far too illegible for use in traditional communication and far to abstract for use at small sizes.

For a graffiti writer, even of limited experience, embedded in the cultural scene(s) surrounding the art it's usually very easy to distinguish lettering created by an actual writer from lettering created by a non-writer in an attempt to emulate an authentic graffiti style. Contrary to much of popular opinion, even tags, the base level, simplest form of Graffit art art not ususally the sloppy scriblings they appear to be. Appearing to some to possess little rhyme or reason, tags are a largely under-appreciated art. They are, in fact, more often then not, highly disciplined, well practiced calligraphic works rendered with unforgiving tools that take time to master. These works contain not only levels of mastery recognizable to the trained eye but alo a wealth of regional, cultural & artistic tradition that, when absent betray the attempt to reach the audience, sometimes offending them instead.

It was this combination of righteuous indignation at the embarrasing faux graffiti lettering too-often seen in media & a genuine desire to see the culture expanded into new places & further validated that inspired the creation and in some cases, even the names of the very first, real Graffiti fonts.


Next Section - the First Graffiti Fonts